Skip to content
All » Home Tech » Google TV vs Apple TV: Which Is Better?

With the ongoing move from cable TV to streaming, many people are trying to decide which device to connect to their TV—Apple TV or Chromecast with Google TV (think of Chromecast as the hardware and Google TV as the software).

In a business environment, it’s important for employees and visitors to be able to wirelessly display a presentation on on a big screen in a meeting room.

Conceptually, Apple TV and Chromecast with Google TV are similar. They are both hardware devices with power in and HDMI out to a TV or to a monitor. The user interfaces have a lot in common. Both have a compact remote control. Both allow for connecting bluetooth devices such as headsets, speakers, keyboards and game controllers.

However, these are just the prices of the razors. The real price for each is the ongoing cost for the different types of razor blades (streaming services) that you can subscribe to. More on those below. 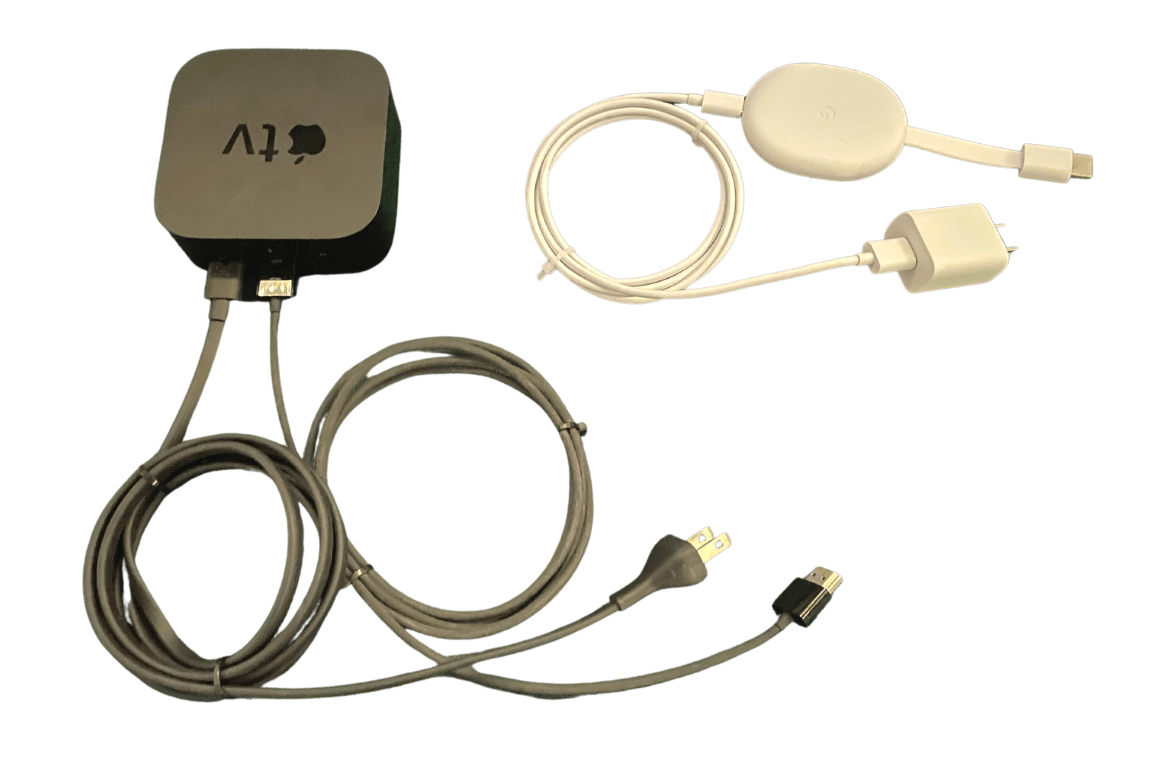 Apple TV first shipped as a standalone device in 2009. Chromecast with Google TV was announced at the end of 2020.

The decade plus head start for Apple TV does not appear to make much of a difference. Google seems to have caught up with Apple in a short amount of time.

Apple TV is designed to sit on a flat surface. If your TV is wall mounted, Apple TV can be attached to the back of your TV or to the wall behind your TV with a third party mounting system.

Apple TV has an 8-pin connector in back for an optional hardwired ethernet connection. The dimensions of the current model Apple TV is 5.3 x 6.4 x 2.6 inches.

The hardware for Chromecast with Google TV hangs off of an HDMI port, which is normally located in the back of the TV or monitor. As such, Chromecast is invisible to those viewing content or playing games.

The top image above shows the relative shape and size of Apple TV and Chromecast.

The Chromecast Voice Remote is compact and intuitive.

The Google Assistant button on the remote can be used to control other Google Nest home devices, such as speakers. Pressing the Assistant button is the equivalent of speaking “Hey, Google” to a Google Nest speaker or to any other Assistant-enabled device. So, you can, for example, speak into the Chromecast Voice Remote, “play jazz standards on living room speaker.”

Apple TV ships with the Apple TV Siri Remote. Like the Chromecast remote, there’s a “press to speak” button. Apple’s remote has a trackpad, which takes a little getting used to.

The Siri Remote has a rechargeable battery. It is charged with the same Apple Lightning connector that is used to charge an iPhone or iPad.

The Siri remote has a glass face that will crack if dropped on a hard surface. The cost of a replacement is in the $50 range.

A replacement remote for Chromecast with Google TV is about $20.

Both devices are primarily conduits for feeding streaming services into your television.

Since streaming service subscriptions represent revenue streams, both Apple and Google want to cross-sell you services that you are not yet subscribed to.

The do this by using artificial intelligence to suggest shows and movies to you that you might be interested in based on what you’ve watched in the past.

The home screen on both devices has a large recommendation slider at the top. Under that are your apps.

A current difference between the two UIs is that Apple TV wraps your apps, whereas Google TV requires you to scroll right to see all of your apps. Google TV has over 30 streaming services.

One of Google TV’s streaming services is Google’s own YouTube TV. This is a replacement for basic cable TV service. The current cost is $64.99 per month. YouTube TV streams local TV stations. It also includes a cloud DVR with unlimited storage for recording content. Premium networks like Showtime can be added at a cost.

On both devices, streaming services such as Amazon Prime, Netflix and HBOMax ask “who’s watching?” when they are launched. Each household member’s watch history and preferences are kept separate.

With Apple TV, it’s takes fewer taps of the remote to switch among YouTube accounts than it does with Google TV.

In the Apple TV YouTube app, you simply need to highlight and select the current user on the main YouTube screen. Then, select a different user.

Mirroring Your Devices on Your TV

If you want to mirror content from your computer, tablet or mobile device to your TV screen, both Apple TV and Google TV allow for this. Google Cast lets you send and control content from a variety of devices to your TV. Devices include: any computer with a Chrome browser; an Android device; a Google Home Hub; and certain iPhone apps. Casting is effectively cross-platform.

There have been reports that Stadia will be available on Google TV sometime in the first half of 2021.

To play games on Apple TV, you’ll need to subscribe to Apple Arcade, which costs $4.99 per month. There is a one month free trial.

Game controllers such as the SteelSeries Nimbus+ Wireless Gaming Controller and the Sony PlayStation DUALSHOCK4 Wireless Controller will work with Apple TV.

What about the times you’re not watching anything in particular, but your TV is on?

Apple TV’s default ambient mode is called Arial screensaver. It’s a slideshow of pictures from around the world.

Mac users can use Sharing under System Preferences to share photos with Apple TV’s screensaver mode.

It’s hard to go wrong with either device. It may come down to the question of whether your business or household is more committed to things Apple or things Google.

With multiple HDMI ports on today’s televisions and with multiple TVs in homes and businesses, some people are using both devices.

Get help claiming grant money for your US-based business